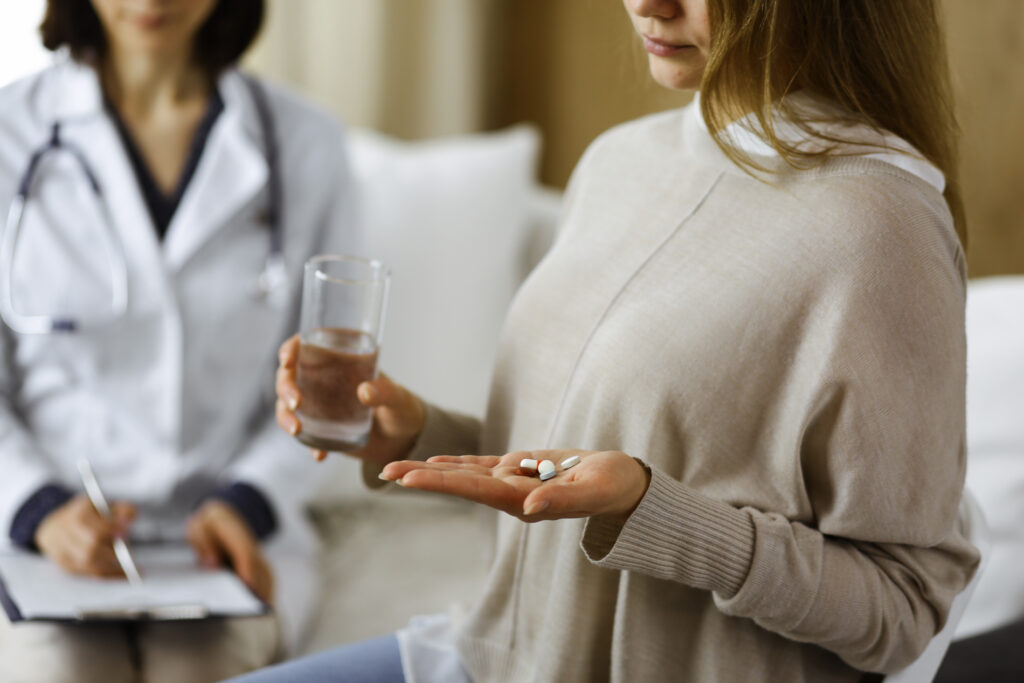 Living with depression can be draining, and finding the right treatment for your symptoms often takes time. With so many options on the market, it’s difficult to know where to start.

Whether your current medications no longer work for you or you’re just embarking on your journey toward living symptom-free, tricyclic antidepressants could be useful remedies to discuss with your care provider. In this article, we’ll compare Doxepin and Pamelor so that you have a better understanding of how they work, what they treat, and the possible side effects.

Take this brief self-evaluation, and we’ll connect you with a licensed care provider in your state who can help treat your depression symptoms.

Pamelor and Doxepin Are the Same Class of Drugs (Tricyclics)

Pamelor and Doxepin are tricyclic antidepressants, which are among the oldest medications developed to treat major depressive disorder (MDD). While tricyclics aren’t right for everyone, they can be useful alternatives when other forms of treatment no longer work or aren’t an option.

Tricyclics are medications that block the reuptake of the neurotransmitters norepinephrine and serotonin. With higher levels of these neurotransmitters in our brains, we experience a boost in energy and mood, making tricyclic antidepressants effective in treating depression symptoms.

Pamelor and Doxepin Are Both Used To Treat Major Depressive Disorder

While Pamelor and Doxepin are both used to treat major depressive disorder, they’re prescribed in different doses and can have unique side effects. Additionally, each medication can be used off-label to treat conditions outside of MDD.

Pamelor (Nortriptyline) is primarily prescribed to treat MDD. That said, it can also be used off-label to treat several issues outside of depression.

What Else Does Doxepin Treat?

Doxepin (Silenor) is most commonly used to treat depression and anxiety. However, like Pamelor, it also has been prescribed off-label to treat other issues.

If you experience chronic pain or trouble sleeping, Doxepin could be an effective medication for you. Off-label uses for Doxepin include managing neuropathic pain and insomnia.

Doses, Dosage Form, and Side Effects of Doxepin

Doxepin comes in different forms and doses, and how you’ll take it depends on your current symptoms, health history, and the advice of your mental healthcare provider.

Doxepin is typically prescribed as a tablet, capsule, or liquid. While everyone’s dosage varies, you can expect to start with 10 to 75 mg daily. Your healthcare provider may increase that dose to 150 mg daily, depending on your symptoms and how you respond to the initial dosing recommendation.

Doxepin has some possible side effects you should be aware of before taking this medication.

Common side effects include:

Some of these side effects may go away with time, but you should alert your healthcare provider if they do not. If you experience any of the following serious side effects, contact your provider immediately or seek emergency medical care.

You should always discuss any medications you’re taking with your care provider before starting a new medication.

How Much Does Doxepin Cost?

The price of Doxepin varies depending on the dose you’re prescribed and which pharmacy you use. You could pay anywhere from $16.99 to $49.47 a month. If you’re looking for a more affordable alternative, speak with your care provider about using the generic Doxepin, Silenor.

Pamelor doesn’t come in as many forms as Doxepin, and it has its own unique side effects. Your dosage depends on what your healthcare provider recommends, which will vary from person to person.

Pamelor is a capsule taken orally in doses ranging from 25 mg to 150 mg per day. Your healthcare provider will likely start you on a low dose to see how you respond to the medication, increasing it as needed to treat your depression symptoms.

Common side effects of Pamelor may dissipate over time as your body gets used to the medication. Those side effects include the following.

If you experience persistent unwanted side effects, you must talk with your mental health provider about your options before abruptly stopping Pamelor.

Pamelor has 647 known drug interactions, with 134 being major, 488 moderate, and 25 minor. Of the medications most frequently prescribed, Pamelor has major interactions with the following.

Pamelor has moderate interactions with:

Pamelor can be quite costly if you’re paying without insurance, with prices starting at $1,251 for 30 capsules of 10 mg. However, the generic version is much more affordable at $21 for 30 capsules at 25 mg. Consult your healthcare provider about your options so that you can get the best available price.

Do I Need A Prescription for Pamelor or Doxepin?

Yes, both Pamelor and Doxepin are only available with a prescription. Selling tricyclic antidepressants without requiring a prescription is illegal and can put your health at risk, as there’s no way to know if the medication includes harmful substances. Using a trusted pharmacy to fill your prescriptions is your best bet.

Tricyclic antidepressants can result in some serious side effects like Serotonin Syndrome, pregnancy risks, and the possibility of increased bleeding. If you experience any of these side effects, contact emergency medical services and alert your care provider.

If you experience any of those symptoms, contact your care provider immediately, as Serotonin Syndrome can be fatal if left untreated.

While using tricyclic antidepressants during pregnancy isn’t necessarily unsafe, it can result in preterm delivery, low birth weight, respiratory distress, and neonatal convulsions. If you become pregnant, speak with your healthcare provider about your options for treating your depression symptoms.

Because tricyclic antidepressants influence serotonin levels, there’s an increased risk of bleeding when taking them. Platelets in your blood release serotonin to help heal wounds and form blood vessels. When taken with other medications that impact serotonin levels, you could have abnormal bleeding. Talk with your healthcare provider immediately if bleeding events occur.

Doxepin is a tricyclic antidepressant most often prescribed to treat major depressive disorder (MDD). It can also be used off-label to treat neuropathic pain, anxiety, and insomnia.

Are Doxepin, Pamelor, and other Tricyclics the same drug?

While Doxepin and Pamelor are both tricyclic antidepressants, they are not the same drug. They each have their own side effects and are prescribed in different doses depending on your symptoms.

Doxepin is approved to treat anxiety, impacting your central nervous system to increase chemicals in the brain that help you relax. Pamelor helps you feel better, but it may not alleviate anxiety symptoms. Which medication is best for you and your symptoms will depend on your health history and the advice of your mental health provider.

Both Doxepin and Pamelor can treat symptoms of depression. That said, both have different drug interactions and side effects. Doxepin has been used for over 40 years to treat depression, whereas Pamelor is a newer medication. Which one is best for you will depend on your current symptoms and the recommendation of your care provider.

Can I drive on antidepressants like Doxepin or Pamelor?

Can I drink alcohol on Doxepin or Pamelor?

Drinking alcohol on Doxepin or Pamelor can reduce the effects of the medications and increase possible negative side effects. Consult your care provider before mixing alcohol with tricyclic antidepressants.

Does it matter what time of day I take Doxepin or Pamelor?

Because both medications can make you drowsy, you should not operate heavy machinery or drive until you know how these medications will affect you. You should always take your medications as directed by your care provider, who will likely recommend taking your first dose before bed.

At Klarity, we know that trying to find a provider in your area, requesting time off from work, and commuting long distances for appointments can make accessing care much more difficult.

That’s why we make treatment accessible through licensed mental health providers on our platform. You can see your care provider online from the comfort of your home at a time that works best for you.

Take our survey today to match with the right provider in your state within 48 hours and get the depression treatment you need.