Focalin vs. Adderall: What Is the Difference & Which One Should I Take? 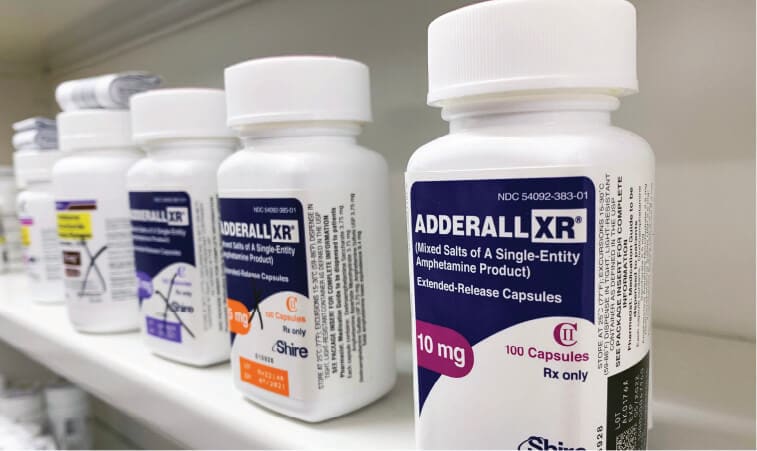 Attention deficit hyperactivity disorder (ADHD) is a condition that has a lot of available treatments, but not every treatment will fit a person’s specific needs. Focalin and Adderall are two of the prescription drugs often used to treat ADHD, but it’s important to recognize how each medicine works before coming to a final decision.

If you suffer from ADHD symptoms, medication may be the solution. Book an appointment with an experienced psychiatric healthcare provider today and get the help you need.

How Do Focalin & Adderall Work?

Both Focalin and Adderall are central nervous system (CNS) stimulants that affect certain neurotransmitters in the brain. Focalin contains dexmethylphenidate, a mild stimulant that is used to treat ADHD. Adderall contains amphetamine salts, which are central nervous system stimulants that work to restore imbalance in the brain. While both medications improve the effectiveness of norepinephrine, Focalin targets the brain’s usage of dopamine while Adderall targets serotonin. For individuals with ADHD, an increase in the efficacy of these neurotransmitters can assist with the lack of focus that is most commonly associated with the disorder.

Focalin and Adderall come in similar dosages, but Adderall has more available dosages for an individual’s unique needs. Both medications also come in an extended-release form that doesn’t have to be taken as often, though Adderall is often slightly more expensive than Focalin. Focalin and Adderall can both have serious interactions with other medications, and should only be taken under the supervision of a licensed clinician.

Due to the stimulant nature of Focalin and Adderall, individuals with high blood pressure or any other heart condition should exercise caution when taking either one of the medications. If, after taking either of these drugs, you experience a severe headache, anxiety, chest pain, uneven heartbeat, or shortness of breath, you should stop taking them and contact your doctor immediately.

According to the Drug Enforcement Agency (DEA), both Focalin and Adderall are classified as Schedule II narcotic drugs. Both medications carry an increased risk of drug abuse and are restricted on a varying basis state by state.

Which is More Effective?

Some studies have shown that the methylphenidate contained in Focalin is more effective in treating children and adolescents, while the amphetamines in Adderall are more effective in adults. Adderall is largely the most prevalent treatment for ADHD and is often the one most prescribed by doctors.

If you believe you have ADHD, proper medication could be the answer. Schedule an online appointment to discuss your situation with an experienced medical provider who can help you with ADHD treatment.

Focalin comes in 2.5 mg, 5 mg, and 10 mg immediate-release tablets, as well as 7 different dosages between 5 mg and 35 mg for the extended-release pills.

Focalin XR is the extended-release version. It is the same medication as Focalin but has therapeutic effects that typically last for 12 hours, as opposed to 4. Both medications take an average of 45 minutes to begin working.

Focalin is primarily used to treat ADHD symptoms, including the inability to pay attention or focus for extended amounts of time. It can also control behavior problems and may improve overall listening skills.

The cost of generic Focalin (Dexmethylphenidate) can range from as low as $22 for 30 of the 2.5 mg tablets, to as high as $766 for 60 capsules of the 35 mg extended-release pills. Most insurances will cover Focalin.

Your provider on Klarity may be able to help you find coupons to make Focalin more affordable.

Some of Focalin’s more common side effects include the following:

In rare cases Focalin may have more serious side effects. Contact your doctor immediately if you experience any of the following:

In rare cases, males may experience a painful or prolonged erection lasting 4 or more hours.

All ADHD medications should only be taken under the supervision of a licensed medical professional. Focalin can be habit-forming, so its use needs to be carefully monitored. When Focalin is taken for an extended amount of time, its effectiveness may decrease, and the dosage will have to be adjusted. Avoid taking certain medications with Focalin, as the interaction could have serious side effects. Contact your doctor for more information on drug interactions.

Adderall is FDA-approved to treat ADHD and narcolepsy, but it can also be used to treat many other disorders including depression, anxiety, and bipolar disorder.

If an individual doesn’t have insurance, brand-name Adderall can cost about $8 per 5 mg tablet, with a 30 day supply costing as much as $237. Adderall also comes in a generic form that is much cheaper, with 30 days of 5 mg tablets costing about $13 and 30 days of maximum dose, extended-release pills costing up to $85.

Your provider on Klarity may be able to help you find coupons that can help you save on your prescription.

Notify your doctor or seek medical attention if you experience more severe side effects including the following:

Adderall, like Focalin, can be habit-forming and should only be taken under the supervision of a licensed medical professional. If the effectiveness of Adderall begins to decline, the dosage may need to be adjusted.

Avoid taking certain medications with Adderall, such as MAO inhibitors and some SSRIs to prevent any negative drug interactions. Be sure to tell your doctor all the medications you’re taking before they prescribe Adderall.

Which ADHD Medication Should You Take?

Finding the right ADHD medication can be a complex process, so it’s important to consider all possible factors in order to avoid a negative outcome. Speak with your ADHD specialist about your medical history and all of the medications you take to avoid any serious drug interactions or side effects. Be sure to review the foods that should not be eaten while taking Focalin or Adderall as well.

There are more side effects for Focalin and Adderall than what has been listed above, and while rare, are still important to be aware of before starting either medication. Be sure to ask your medical provider about these side effects as you begin your ADHD treatment.

Focalin and Adderall may appear to be very similar medications, but there are slight distinctions that make knowing the difference between the two very important. Book an online appointment with a psychiatric medical provider today who, if indicated, will prescribe the medication that’s best for you and send it to the pharmacy of your choice.