What to Eat When You Have ADHD 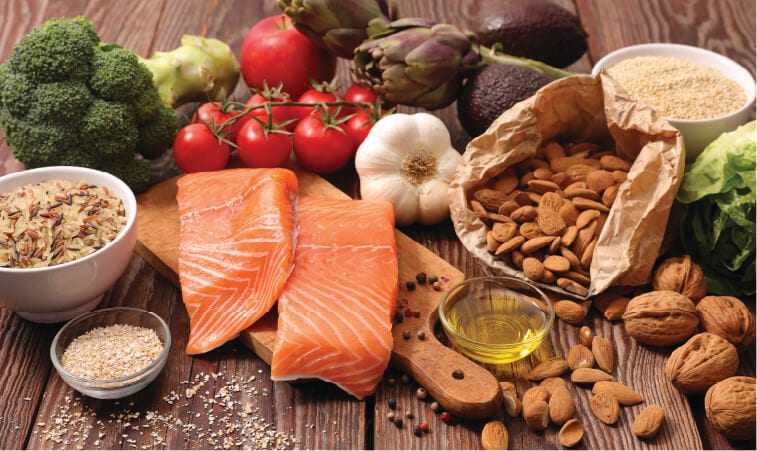 If you suffer from adult ADHD, you know you’ll do anything to reduce your symptoms. Treatment and medication can help considerably in managing your ADHD, but it’s important to consider all aspects of your life and look for ways you can live better, including your diet.

Diet is important whether you have ADHD or not, but eating the right foods (and avoiding others) can play an important role in how you feel in general and specifically in helping mitigate your ADHD symptoms. In this article, we’ll discuss foods that help with ADHD and what to avoid in your diet.

If you think you have adult ADHD and have yet to be diagnosed, take a free 2-minute self-evaluation and get started on your journey to effectively managing your symptoms.

ADHD is a neurobiological disorder that, according to the National Institute of Mental Health, is found in 4.4% of adults in the United States. Adult ADHD symptoms are typified by forgetfulness, distractibility, and a number of other symptoms that make it difficult to maintain daily life.

There are three major types of ADHD:

While there is no clear scientific evidence that the foods you eat can cause ADHD, studies have shown that maintaining a proper diet may have an effect on your ADHD symptoms. While medication and therapy are the most important components in your struggle with ADHD, diet can play an important role as well.

We’ve compiled a list of suggestions to help you make good decisions that can complement your ADHD treatment and therapy.

Foods that May Help With ADHD Symptoms

Incorporate high-protein foods into your regular diet. Try to include them as part of breakfast so your neurotransmitter level remains consistent throughout the day. Proteins also help prevent sugar spikes and dips, so you’ll experience fewer changes in mood. Making sure that you eat high-protein foods can help you regulate your ADHD symptoms and can make a significant difference in your overall health.

Fruit and vegetable consumption is linked to both physical and mental health. A study conducted by Social Science and Medicine panel data from the UK suggests that “mental well-being responds … to increases in both the quantity and the frequency of fruits and vegetables consumed.”

If there is an imbalance between antioxidants and free radicals in your system, you suffer from a condition known as oxidative stress. Researchers believe there may be a connection between oxidative stress and brain function, and relieving oxidative stress may improve ADHD symptoms.

As with other healthy foods, complex carbohydrates play an important role in overall health along with mental health. Such carbohydrates are the principal fuel for both the brain and muscles. Including them as a regular part of your diet can contribute to a lower risk of heart disease, type-2 diabetes, and obesity.

Vitamins and Minerals that May Help With ADHD Symptoms

Maintaining a healthy diet that helps address ADHD symptoms means making healthy food choices, but it can also include vitamins and minerals that have been associated with mental wellness.

Recommended vitamins and minerals can be found in food sources, but supplementation can help you maintain a healthy balance in your bloodstream. Be sure to discuss adding any supplement to your diet with your doctor to ensure it won’t interact with your medications or potentially cause any unforeseen health issues.

Physical and mental health depends on maintaining a proper level of vitamins and nutrients. While there is no definite proof that taking multivitamins directly affects ADHD symptoms, addressing overall health is important in managing ADHD.

A small-scale study reported by BBC News indicated that after 8 weeks of treatment, adults with ADHD given a multivitamin experienced greater improvements in both inattentiveness and hyperactivity than those given a placebo. While multivitamins are no substitute for ADHD medication, they can play a role in maintaining overall mental health and managing symptoms.

B vitamins are essential components in maintaining a healthy body and mind. Along with having a direct impact on metabolism and energy levels, B vitamins play an important role in maintaining mental health as well. While most people are able to get adequate levels of B vitamins in their diet, there can be deficiencies that can impact overall health.

Studies have shown that vitamin B-6, taken in conjunction with magnesium, can have a direct impact on ADHD symptoms.

Studies referenced by ADDitude indicate that people with ADHD may have lower levels of zinc in the bloodstream. Adding zinc supplements to your diet may help reduce hyperactivity and impulsivity (but have no impact on inattentiveness).

It’s important to consult with your doctor before adding zinc supplements to your diet, as too much can be toxic and can cause side effects of its own.

Studies have indicated that a childhood iron deficiency can contribute to increased ADHD symptoms such as inattentiveness, hyperactivity, and impulsivity. Another study showed an association between iron deficiency, anemia, and psychiatric disorders.

You can get iron in your diet by eating iron-rich foods such as beef or chicken liver and oysters. You can also obtain additional dietary iron by taking supplements. As always, be sure to consult with your doctor before adding iron supplements to your diet.

In a study referenced by ZRT Laboratory, 72% of children and adolescents with ADHD were found to have magnesium deficiencies. The magnesium-deficient children were separated into two groups, with one given magnesium supplements in addition to ADHD treatment. That group showed significant improvements in ADHD symptoms, including hyperactivity, impulsivity, and inattentiveness.

Magnesium can be found in many foods, including green leafy vegetables, legumes, whole wheat, and nuts and seeds. Magnesium is also available in supplements, often combined with vitamin B-6, which aids in absorption. Consult with your doctor to determine the best and safest dose.

There have been several studies establishing a connection between Omega-3 fatty acids and ADHD symptoms. In studies referenced by ADDitude, children with ADHD had blood levels with a 38% lower amount of omega-3s than those without the disorder. In addition, supplementing with omega-3s has been shown to decrease inattention and hyperactivity.

Omega-3s are found in fatty fish like tuna and salmon, so it’s recommended that you add those to your diet 2-3 times per week. You can also take an omega-3 supplement, but before you add a supplement to your regimen be sure to consult with your physician.

Foods that ADHD Sufferers Should Avoid

There are a number of foods that may exacerbate ADHD symptoms. These are foods that are typically considered unhealthy in general and should be limited if not entirely eliminated from your diet.

While sugar or anything else in your diet can’t cause ADHD, excessive sugar can exacerbate ADHD symptoms. Those with ADHD should remove or significantly reduce high-sugar foods in their diets.

You should look out for all forms of sugar, including high fructose corn syrup. ADHD dieticians recommend reducing or eliminating soda and other foods and drinks with a lot of sugar.

Simple carbohydrates break down rapidly in the body, which spikes blood sugar and insulin. This leads to an initial burst of energy that may increase ADHD symptoms such as hyperactivity, followed by a crash that can result in an increase in inattentiveness.

While simple carbohydrates can be found in natural foods such as fruit and milk, most simple carbs are found in processed foods like white flour and sugar. Try to include more complex carbohydrates, such as oatmeal, whole grain breads, and legumes, which take longer for the body to process and release energy more slowly and efficiently.

Caffeine and ADHD medications have a complex relationship. Caffeine, being a stimulant, increases dopamine levels, which have a positive effect on moderating ADHD symptoms. However, in higher doses, caffeine can exacerbate ADHD medications’ side effects, such as insomnia and stomach issues.

Caffeine has different effects in different people, so you may feel no improvement in your ADHD symptoms associated with consumption.

As with anything included in your diet, you should enjoy caffeine in moderation. 400mg per day is a moderate dose. This is the approximate amount of caffeine found in 2 cups of coffee. Caffeine is also found in soda and chocolate, so along with limiting those for having high sugar levels, you should keep an eye out for caffeine.

Find Out If You Have ADHD

Watching your diet is only part of managing ADHD symptoms. If you suspect you have ADHD, don’t wait any longer to find out for sure. Having your ADHD treated as soon as possible is key to avoiding a worsening of symptoms. Take this free 2-min self-assessment to get progress toward ADHD diagnosis and treatment from a licensed healthcare professional at Klarity.

Contact Klarity to Schedule Your Online ADHD Diagnosis and Treatment